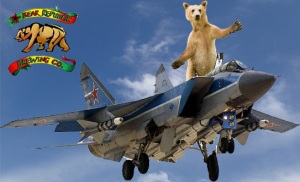 They didn't have a logo, so I made one.

The Bear Republic Mach 10 is a hopstravaganza.  Most of you have had the Racer 5, Bear’s hoppy IPA.  Well, the Mach 10 (as I’m sure you’ve guessed) is their double IPA.

Generally speaking, it’s twice the power of the Racer 5.  A lot more hops, a lot more malt.  It will crush your taste buds.

The Mach 10 pours a great bronze color with a huge floral hop aroma.  One small sniff and you know what you’re in for.  The flavor is all hops up front.  Very floral with a little citrus tanginess.  There’s a gentle malty middle to spare you from the crush of the hops.  The finish is fairly dry and slightly bitter with the hops making a quick return before exiting the building.

If you’re a hoppy beer fan, definitely check this one out.  I think there are other beers out there that do the double/imperial IPA idea a little better, but the Mach 10 is in no way a bad beer.

This entry was posted on December 1, 2010 by jtonzi. It was filed under Reviews and was tagged with Bear Republic, BEER!, Tonzi.