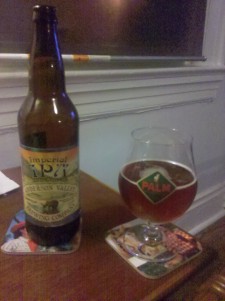 Anderson Valley makes some delicious beers; however, I’m not a huge fan of their IPA, so you should know that as you read this post. Of course, you might ask why would I check out their Imperial IPA, but that’s just ridiculous — I love drinking beer and have rarely found a beer that I won’t try at least once.

While Squirrel and I found this big bottle out in California (Cork ‘n Bottle in Fremont has a badass selection that’s better than BevMo AND they’re expanding), I did see it in four pack form yesterday at Whole Foods on P St, so I haven’t broken my promise to focus more on DC beers. Based on the words on the bottle, Anderson Valley first made the Imperial IPA to celebrate their 20th year brewing and warns that they use a lot of malt to balance out the 20 separate additions of hops. For me, this is great news as I find their regular IPA to be too far on the hops side — yea, I like hops, but similar to when I eat spicy food, I don’t want to only taste the spice.

On the Eyes: It pours a nice red/amber color with a white head that thins out but still remains on the outer circle.

On the nose: The smell is pretty faint and comes off sweet.

On the lips: Oh, it tastes soooo good. It’s a well-made, interesting beer. The beer starts off with a good piney hops taste that immediately gives way to some delicious malty sweetness. I love beers that pull off this kind of balance — it’s like getting two beers in one! Even better, when you take a breath, you get the flavors again.

On the tongue? cheek? throat? gut?: It’s pretty middle of the road in terms of body; that said, it does give your throat a good coating — the reason you get the flavors when you breath.

In the end, I recommend splitting a four pack with a buddy or trying to find it in single bottles. DRINK IT and let us know what you think…

This entry was posted on August 24, 2011 by shintern1909. It was filed under Reviews and was tagged with Anderson Valley, DC MARKET!, Drink It, Imperial IPA, OMG it's a beer review!!!, Shintern.