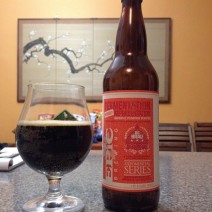 So, this might be a bit out of season since Pumpkin flavored brews are typically released in Fall when we’re all eating pumpkin pie, but on a recent trip to Total Wine, I came across a couple of big bottles of the second release of Epic and DC Brau’s collaborative Imperial Pumpkin Porter, Fermentation Without Representation. While one of my two bottles will age for a while in my beer cupboard (perhaps as an incentive for X to do another Great Pumpkin Beerathon), I decided to crack open one and write up a long-due big bottle.

Now, I don’t particularly remember having this beer when it was released on tap, so it was likely a simple taste. I’m pretty excited to try it again in a more coherent state. I love pumpkin pie, Epic makes great beers, and imperial porters are right in my wheelhouse. The fact that DC Brau helped is putting me on edge in a similar way to those stereotypical gifts from your Aunt/Uncle — usually, you have to pretend you like it, but every-once-in-awhile, they knock it out of the park. Let’s hope for the latter.

Pour: It pours similar to what you’d expect in an imperial porter, black with a nice creme colored head. Nothing to suspect something interesting is lurking within…

Aroma: BOOM! There’s the pumpkin spice, but to be honest, it’s there but not as over-bearing as some of the more pumpkin-y porters out there. For me, this is a good thing. Other than the spice, I don’t pick up much aside from a touch of the typical-boozy smell of porters.

Taste: I think it’s pretty interesting and a good change from the normal or bourbon-barrel porters that I usually drink. The flavor range goes from boozy-porter to an interesting little bit of pumpkin and ends with a bit of a sort of gritty coffee bitterness in the throat. Now, akin to the aroma, the taste isn’t overwhelmed by pumpkin like the bigger pumpkin beers.

Body: Fermentation Without Representation still has the body of a porter; it has a medium thickness that lightly coats your mouth and throat for a few seconds but then clears out.

All in all, I think this is a decent pumpkin beer, especially if you don’t want to feel like you’re drinking pumpkin pie filling. It’s good, but I don’t think it’s the absolute best pumpkin beer out there — just a good starter beer to get yourself used to the flavoring. If you come across it, it may be worth socking one away for a year, but I can’t make promises about how it’ll be until next year.

Till then, it’s good