As you know, Tonzi moved to Chicago (that’s their flag to the left) and without our leader the rest of us have slacked on posting new content.  All of us here at J Street would like to apologize for our…well…laziness.  We will be making a concerted effort to get back into the swing of things with more reviews.  I know we’ve all been drinking and have plenty of ideas for new posts.

Sadly, I won’t be writing much for J Street Beer anymore.  I may make the occasional cameo, but my posts will be few and far between.

With this disappointing announcement, I do have a happy one:

Hopefully I’ll be seeing you all soon.

A Gentle (and selfish) Prayer for SAVOR Week

I love you guys.  You’ve been great to me over the years.  You’ve gotten me through a few beer-related binds and I must thank you.  When I went to GABF with Pyzocha a few years ago and left my tickets at home, you were there to help my wife and a friend get the tickets shipped out to Denver, and you told the nice organizer lady that it was okay to reprint a few tickets for us so we wouldn’t miss a day.

I come to you again asking for a favor.  It’s SAVOR Week, and being a new father, I don’t have the time to go to many events.  I’ve decided upon Thursday’s Lupulin Reunulin and Saturday’s SAVOR as the 2 things I’d like to go to.  This, however, is not up to me.  There is a very vocal little girl and her incredibly patient mother that get to decide whether I’ll be going or not.

So, with that said, could you help me out?  Perhaps, put in a good word with the Calm Baby Gods and see if we can work out a deal?

Thank you for all your help. 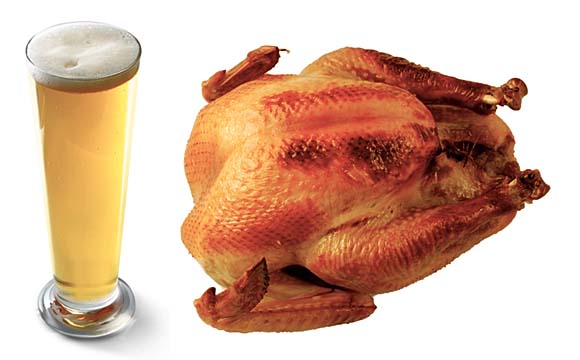 From all of us at J Street Beer, HAPPY THANKSGIVING!!!

Enjoy the turkey, the stuffing, the potatoes, the cranberry sauce, and don’t forget the veggies.  And always remember, beer is better than wine.  So have a beer with your feast this Thanksgiving! 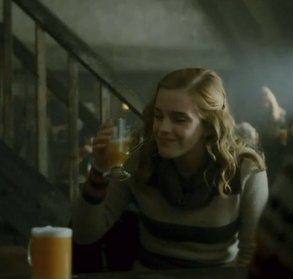 In case you’ve been asleep for the last 10 years, there’s this pretty popular book/film franchise called Harry Potter.  In case you have a life, and haven’t completely and totally immersed yourself in every nuance of the film, a bit of back story. The characters frequently drink a beverage known as “butterbeer.” Butterbeer is never really described in detail in the literature.  It’s apparently alcoholic enough that a house elf will be drunk after consuming more than 1, but they also serve them to 13 year-old students in the pubs, so it can’t be that bad.  (Oh, wait, this is Britain, so it wouldn’t surprise me if it’s 10%).   It’s usually served in an Irish Coffee glass in pubs, though is available in bottles as well.  The beverage is a cloudy, light brown colour, with a thick white head.  Filmmakers chose to emphasize this latter feature by having Emma Watson sport a foam mustache in Harry Potter 6.

At the recently opened Wizarding World of Harry Potter at Universal Studios in Orlando, FL you can pop into a copy of the Three Broomsticks – the staple Harry Potter pub – and buy an official butterbeer.   While no official recipe  has been released, any number of possible recipes have floated around the internet since it opened.

Apparently, in anticipation of going to see the newly released Harry Potter 7 (part 1), some people – in their few spare moments – have been re-re-re-re-re…-watching all the Harry Potter movies before heading off to the theatre.  As part of that sad, lonely, and exhilarating build-up they may be considering drinking a butterbeer to really build the experience.  For those poor wretched souls, I thought I’d make one of the butterbeer recipes and do a quick review.

END_OF_DOCUMENT_TOKEN_TO_BE_REPLACED

We all learned the story in High School.  On the 11th hour, of the 11th day of the 11th month 1918 the guns fell silent in Western Europe heralding an end to the single most destructive global conflict ever seen, with over 10 million dead and 20 million wounded.  Those raw numbers alone don’t tell the full tale. The long presence of the BEF in the low countries introduced British pale ales to Belgian brewers, giving rise to new Belgian beers like Palm.

When the US entered the War in in 1917, the symptoms of its Dutch disease were on clear display.  Its armed forces ranked only 17th in the world with just over 107,000 men at arms, and a lackluster reserve of 132,000 national guardsmen.  By the end of the war, US forces totaled over 4  million men.  The US entered the war at a decisive phase as German troops streamed from the Russian front to the West.  Stopping only in Paris to announce “Lafayette, I am here,” the US forces proved an essential addition to the shell-shocked and battered Allied armies and ultimately helped force an end to the war.

Certainly, this was not the first time American servicemen had put their lives on the line for the rest of the country, and thankfully it wouldn’t be the last.  Unfortunately, that continued service comes with a cost.  Over 400,000 dead in World War II, over 50,000 each in Korea and Vietnam, and countless others in Beirut, Granada, Panama, Iraq, Somalia, Afghanistan, Iraq (again), and myriad locations around the globe.  The sacrifice of those who served, the few who were willing to stand up for the many, is truly astounding.

On behalf of everyone here at J Street Beer, to all the men and women of the American armed forces – past and present – THANK YOU.  If you see us out at a bar tonight, the next round’s on us.  Just not a Palm.

This is our 100th post.  It’s hard to believe we’re still alive and kicking after a 100 posts, but here we are.

We’ll continue to bring you our notes on beer and life, and our insanely biased views of our favorite (and hated) beers.  Well, as long as you keep reading it.

Again, thank you very much for you support!

And, as always, feel free to tell us what you think in the comments or via email. (we like it when you talk to us)

A Note of Appreciation to a Dedicated Beer Drinker

I just wanted to throw up a quick post to show my appreciation for X and his dedication.  He risked life and liver to provide us with a 10 hour long beer consuming marathon that is a testament to his pride as a true beer drinker.

All of us here at J Street Beer are impressed by X’s effort and proud to be a part of this epic beer adventure.

Thank you to everyone who watched.  And a huge thank you to X for making it an enjoyable Friday afternoon.

Try not to vomit tonight.