I have had a couple of Widmer Brothers beers since moving back to States in 2009, and, to be honest, the jury is still out for me. I’ve had a couple that I find delicious (usually the styles that are not cheap to make but easy to get right like barrel aged stouts) and a few (say, the lemongrass that was unique but not my mug of beer) that finished with the same “only a little bit more to go, just gut it out” facial expression as I have during that last mile of run. Consequently, I have decided to try and stick to their darker style beers for the time being.

Now, I picked up the Widmer Brothers Dark Saison as one of the 24 that I grabbed in the olio (means “mixture” and is a word that gets as much use in crosswords as a Miller Lite tap in a college bar) made possible by a Groupon.  Let’s see how it shook out:

Pour: Came out a rich brown color with traces of red. The little white head disappeared in about 10 seconds, and it had loads of carbonation at beginning but then nothing aside from very small bubbles coming up through the middle of the glass..

Aroma: It came off a little sweet with hints of dark fruit (like prunes), but there was a little spice towards the end of a deep inhale, too.

Taste: The Dark Saison was sweet for an instant at the beginning but finished with a mild tartness. The sweetness reminded me of banana chips.

Body: The beer has a nice thin body that has a surprising bit of carbonation, which I wouldn’t expect based on not seeing more bubbles in the beer, but maybe it’s quantity and not quality — lots of wee little bubbles.

In the end, Meh. I’ve had better saisons. 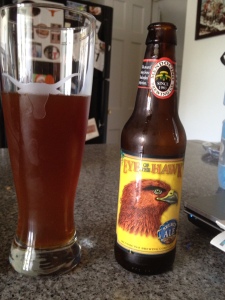 I have this issue with driving somewhere in Virginia where no matter what, I get lost the first time I go there. Typically, this only leads to cursing in the car and apologizing when I show up 15 minutes late. Honestly, it’s never gone well for me until a couple of weeks ago when I came finally came across Total Wine while trying to find a bowling alley (stupid google maps). Since moving to the area, I had heard all about this magical store out in Virginia but never really found the time to go out there, so once I saw it, I had to go. When I turned the corner to start walking up the beer aisle, I knew that getting lost this time was divine intervention. They had all sorts of great stuff, but this beer, Mendocino Brewing Co.’s Eye of the Hawk, stood out since I had just had it on tap near their Ukiah brewery. I thought it was pretty good then but was unable to do notes on the fly, so thanks to Total Wine for making this review happen.

Color/Pour: The beer pours very easily and with very little head or carbonation. It comes out a milky red/brown color that reminds me of store-bought ice tea in jugs.

Aroma: The beer has a heavy fruity sweetness. The smell is a lot like the one you get from a dried bag of banana chips. Thus, I’m starting to think I might have been wrong about this beer when I got it in CA…

Taste: …until now. The beer does not really have the sweetness or taste that I would associate with the aroma. Yes, it tastes a sweet on the back-end, but the front-end has an incredibly balanced flavor given the aroma. Nothing really sticks out — not malty sweet or hoppy bitter. Very well done.

Body: The texture of the beer reminds me of a slightly diluted barley wine. It’s heavy and seems to try to coat your mouth but doesn’t succeed. It clears with just a little reminder of the dried banana on the first inhale after drinking.

All in all, I think this is a solid American Strong Ale and recommend keeping an eye out for it. I’m not a massive fan of barley wines, and this beer seems to be toeing the line right below that style, and I like it. 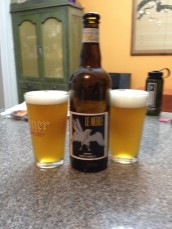 I picked up this big bottle at Whole Foods in Clarendon ($8) because Squirrel had excitedly texted me a photo of it one night and raved about its amazing qualities.

Well, upon further review during a recent holiday, she recanted, and I confirmed. Squirrel succumbed to the equivalent of beer-googles for the tongue. It happens to all of us; it gets close to the end of the night, you order that one last beer that you’ve been wanting to try and just saw be put on tap or in the cooler, it’s the most amazing thing in the world, you tell your friends (hell, you even order it for them the next time y’all go out), and… it’s blah. To be honest, I wouldn’t have tried this, but I (1) heard some good things about it and (2) trust North Coast Brewery based on Old Rasputin, Acme, Scrimshaw, and Red Seal. The beers coming out of Fort Bragg, CA are definitely worth trying; however, Le Merle’s description had one word that made me worry about buying a big bottle of it: Saison. I’m just not a big fan of that style.

Enough rambling, on to the review:

Color: Cloudy golden yellow with a thick white head and a good amount of carbonation

Aroma: Seems to be all over the place. At the same time it smelt sweet, I would also get a little sour. In terms of fruit, I got a little citrus & apple.

Taste: From my notes, “Sour fizz. Nothing spectacular, nothing terrible but definitely not on of my preferred styles.” Sorry, I can’t be more specific, but it really seemed overly sour/tangy for a saison, and I wanted to finish it off quickly.

Overall, it appears to be a carbonated/fizzy, not so balanced, or great, saison, and I wasn’t the only one who thought that. Squirrel took a couple of drinks before turning to me and apologizing for recommending the beer. Late night beer remorse happens, just make sure it doesn’t stop the beer adventure.

P.S. Perhaps Squirrel was playing a joke on me like some of us did to the other writers with Shiner’s Ruby Red-craptastic summer beer… 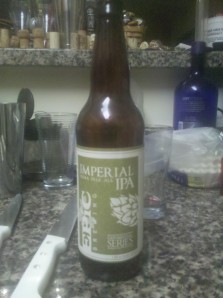 I really can’t remember whether I picked this beer up at Whole Foods on P St NW or D’vines on 14th NW, and I wish I did because I want another. No matter where it was purchased, I remember thinking that I had heard good things about Epic and couldn’t pass up a quasi-special edition imperial IPA.

Based on previous reviews, I feel that readers have gotten to know my tastes pretty well; when it comes to IPAs, I prefer ones that have a good balance between the floral/citrus and bitterness – even if one hits you up front and the other follows. Even though the Epic Imperial IPA was a bit on the sweeter side, it did not disappoint, and I honestly think it’s one of the better tasting IPAs I’ve ever had. Thankfully, I decided to save this big bottle to share with a fellow J Streeter (Pyzocha) who also agreed that this beer is stellar.

The beer is a cloudy yellow color with a nice white head, and it has a nice floral sweet smell. The taste is absolutely divine – a nice floral sweetness with a touch of citrus that is followed with just enough bitterness to clean the palette. The beer’s body was creamy, full of flavor and had a small aftertaste.

All in all, get it! And tell me where you find it, so I can get some more…