In case you haven’t heard Smith Commons is hosting an amazing BBQ this Sunday, July 3rd. What more American way is there to spend Indepence Day then with awesome people, food, and of course lots of beer. This event will pair 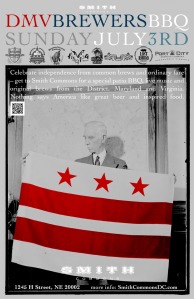 some great food with beers from 8, count them 8, local breweries.

First take a look at the food menu from Tonzi’s post. I’m not going to name names but one employee of an attending brewery mentioned that the short rib was some of the best he has ever had, so I trust the food will be excellent.

Onto the beer. The 8 breweries that will be attending are 3 Stars, DC Brau, Port City, Baying Hound, Flying Dog, Heavy Seas, Lost Rhino, and Stillwater. Representatives from each brewery will be on hand and on the 2nd floor at about 7 they will be introduced and speak a bit about their beers and I’m sure share lots of entertaining stories.

All pints are only $5 so if you are in town this weekend, there is no other place to be.

In DC for the 4th? Get to Smith Commons! 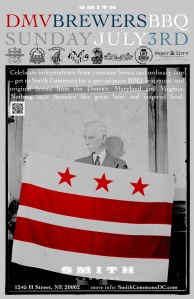 Have you ever asked yourself, “why isn’t there be a place that I could go and try beers from breweries in the DC Metro area, and enjoy an incredible barbecue at the same time?”

I have great news!  Smith Commons is throwing a bash this Fourth of July Weekend that should not be missed!

This event is going to be incredible!

They’ll be offering up delicious foods and (most importantly) local brews.

Read on for more details!